Is Lithium Right for my RV?

Lithium can be economical choice for those with heavy use or >1000 watt inverters. The most propelling reason for most people to switch to Lithium is the charge cycle. They charge faster, very little self discharge, discharge slower under bigger loads(Peukert effect) and unlike lead batteries, NEVER require a full charge!

Lithium does not have a Peukert effect (this is where the bigger the load on a battery the less capacity it has), this is huge for people with inverters! Lithium will also charge more effectively than other types of batteries. By  skipping most of the absorption cycle, Lithium can charge 1-5 hours faster than equivalent flooded or AGM batteries. This can be critical when using a generator or solar to charge on cloudy or short sun days. Battle Born Lithium states 98% efficiency and Lifeline AGM states 97% efficiency and Trojan Flooded states 94% efficiency. Lithium laboratory tests yield >2800 cycles compared to flooded laboratory tests yielding around 850 cycles, more on this below. Lithium will allow you to use ‘all’ of the advertised capacity and weighs ⅓ to ¼ less than AGM or Flooded batteries.

Lithium batteries don’t like the cold. You can discharge them at temps from -4 to 140 degrees F but if you do charge them at <32 degrees F, there can be permanent damage. So if your RV battery temperature drops too low and your solar charger or converter charger starts to charge your Lithium battery bank on its own you could destroy the batteries. You can spend some time and build an insulated chamber for the battery, add a battery heater and/or locate the battery in a living compartment to keep the battery temperature above 32 degrees. Victron solar charge controllers can be set to not charge below a certain temperature. Maybe you will never have your RV in a location where the battery could get that cold!

The cost of Lithium is also a factor. Trojan Trillium Lithium will cost you about $1250 for a useable 100 Amp Hours-(AH) while Deka flooded golf cart batteries will run $210 for useable 140AH. Now if you do the math with cycle life and shop Lithium prices, the gap gets much smaller. In the real word most people achieve 1/3 to 1/2 the laboratory cycle rate of AGM and flooded batteries. We don’t know how many cycles Lithium will yield in the real world yet. 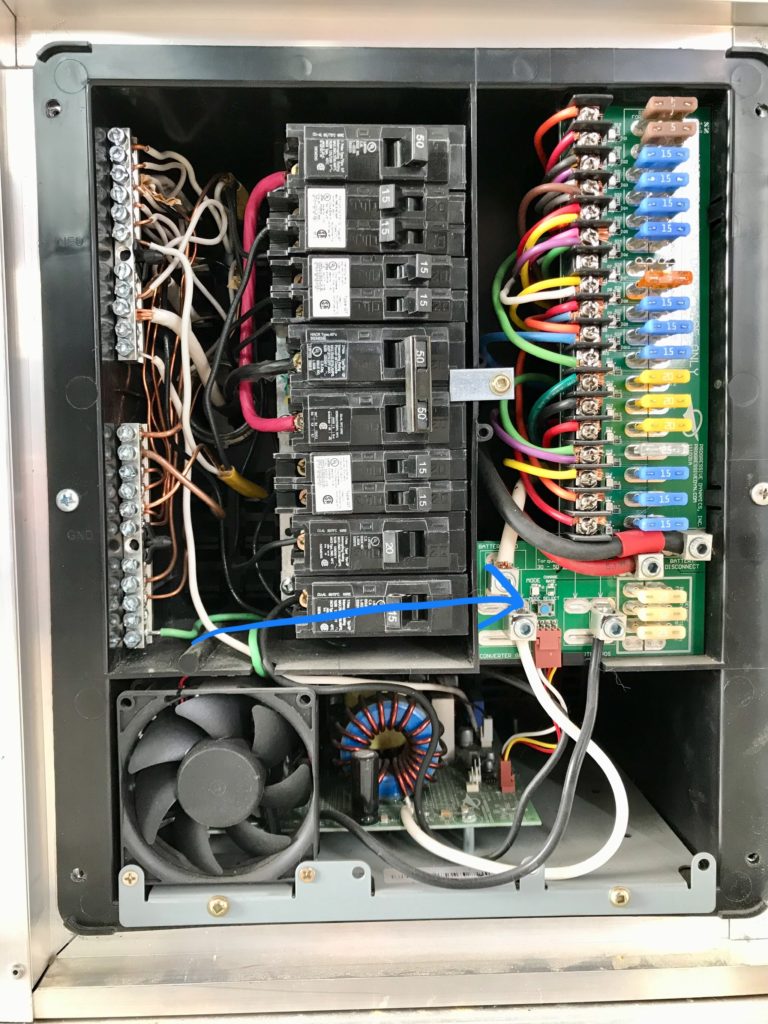 There can be more parts required when switching to Lithium. Many manufactures make ‘drop in replacement batteries’ (just means it will fit most RV’s battery locations) and these are OK for the converter charger made by Progressive Dynamics. You will need to push and hold the converter button for 2 seconds after you connect shore/generator power so that it will charge the battery with 40 amps at 14.6 volts (boost mode) for 4 hours before going back to normal mode at 13.6 volt. If you do not push the button the charge wizard will not put out more than 13.6 Volts, this will not charge your lithium battery completely. You can always purchase the lithium version of the converter charger from Progressive Dynamics, it will do the 14.4 V until charged, then switches to 13.6 all on its own.

Thermal runaway is where the battery temperature rises out of control and is much worse with Lithium than AGM or flooded batteries. A battery can melt, catch on fire or even explode. If a Lithium battery gets overcharged (when the cells are out of balance it is easier to overcharge one cell)  thermal runaway will happen. If you discharge Lithium too far, it will be ruined.  There needs to be a Battery Management System (BMS) to take the battery offline before things get out of control. Most drop in replacements have some form of a BMS on board the individual battery but I still recommend that it should not the only form of protection. There are many ways to add BMS features and those parts can cost $400 or more. I myself would never recommend installing Lithium without using a BMS type system or redundant check and balance systems.

Lithium is bleeding edge technology for RV’s. It is a very exciting time for batteries and the future has hints of doubling the wh/kg! Technomadia built their own battery bank out of prism lithium cells. They have experienced measurable capacity loss in the first 3 years(<1095 cycles). They are not the only ones to report capacity loss with Lithium and it is believed to be directly related to high battery temperatures and time spent at 100% SOC. Real people that use Lithium in RVs seem to believe that the battery is happier <75% SOC and important to keep battery temperatures below 100 degrees.

The big players with drop in replacement Lithium seem to be Trojan, Relion, LifeBlue, Battleborn, and many others popping up faster than one can count. Trojan and Battleborn are the only manufacturers that I am aware of to claim their on board BMS is stand alone safe. They also seem to have a good price vs performance ratio. Others will require adding in low voltage cut off, high voltage cutoff, low temp cutoff, high temp cutoff and of course balance checking/charging. Battleborn use 26650 cylindrical cells to assemble their battery parts in the US. Tesla currently uses 18650 and 21700 cylindrical cells, there could be more reliability to these type of cells due to thermal management?

I live off grid in my ATC toy hauler year round and I started with 300AH of Lifeline AGM battery bank. I have not had my batteries below 40 degrees even when the outside temperatures dipped to 25 degrees. My battery bank is underneath the sink, next to the heat duct which helps them stay warmer. I now have 3 Tesla model S modules (Lithium) and I am very impressed with them! For weekend warriors my advice would be to look very hard at AGM or Flooded and put any extra money towards solar to keep battery topped off.

If your looking at drop in Lithium, I would look at Trojan first. Trojan is a huge company which puts them in a better position to honor a warranty therefore I chose to distribute them.

Can you run AC from solar and batteries?