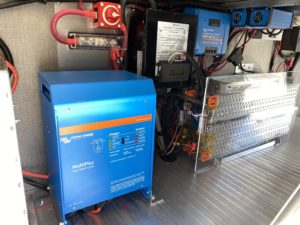 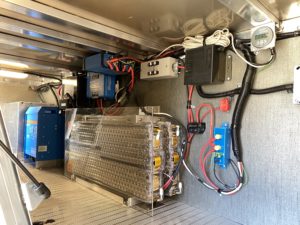 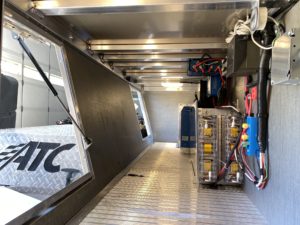 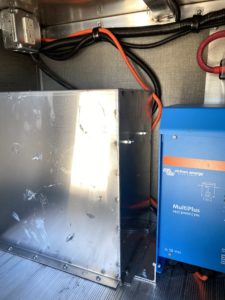 20A GFCI plug in front 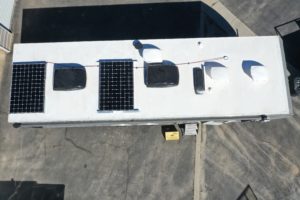 This customer’s existing set up in 2020 29′ FB included the 5500 Onan and 3 flooded batteries to make it through the night. He wanted a solution that included getting rid of the acid batteries, more room for gear and running AC off batteries to keep more fuel for the toys!

The Problem With Their Old Setup

The flooded lead acid batteries were never getting charged as they were Interstate GC batteries that wanted 15.2v and the converter would never charge them fully. He was disappointed on how much space the batteries and vented boxes took up in the front compartment. It is very common to camp in hot places requiring the AC running which drained the fuel tank before he was done playing with his toys. When stuffing the front compartment with axes and other heavy stuff he had to be careful of the 4ga wires running to generator across the floor.

This install took place at 10,500′ to keep the temps under 80 degrees! A 10kW battery bank (two Tesla Modules) and 3000 watt inverter would allow for silent, fuel saving Air Conditioning, microwave and TV off battery at any time of day or night. The AC would run for 4+ hours.

I was able to fit two 350 watt panels on the roof for total of 700w to help charge and offset inverter useage. If the antenna was in different spot I could have fit 1050 watts on roof if your reading this ATC.

I was able to use two of the Orion 24v to 12v converters to start the Onan which allowed more room by removing all other batteries from the system!

I installed a Victron Mutiplus 3,000 watt hybrid-inverter to run the entire trailer from battery power. Customer opted for the onboard display of the Color Control which orchestrates all of the parts of the system well. It will data log, view and control the electrical systems. This system as programmed will just work off solar, generator or shore power seamlessly.

After the install as you can see from the pictures there is plenty of room to haul 8′ material loaded up from the side door!

We decided to add a 20 amp GFCI outlet in the front compartment since there was not one on stock trailer. This would work well if he ever wanted to heat batteries with incandescent light bulb or heater.

There is redundancy for temp and voltage for the Lithium battery including mini BMS. If the Tesla batteries are ever emptied below the programmed threshold the system disconnects. There is still enough in batteries to reliably start the generator Generator via the Orions. Once Shore/Solar/Generator power is supplied the batteries will charge and the system comes back online. The Converter can power the 12v side of trailer and is operational but retired. The charger section of the inverter can put 70A into the battery from generator/shore power.

Ask Me About This Install!