Tony & Vera have a 28 foot trailer with a single solar panel on the roof. That panel charges up a pair of 6 volt golf cart batteries made by Interstate. Sitting between the two is a cheap, Chinese-made solar charge controller that came with the trailer.

Problem With Their Solar Charge Controller

The controller was not programmable, and forced a bulk charge rate of 14.4 volts. Their Interstate batteries, however, wanted a bulk charge rate of 15.2 volts. This discrepancy meant that their batteries would never charge to 100%. At best they could only get about 80% of state of charge (SOC). As it stood, their batteries were slowly becoming damaged. They needed a better solar charge controller. 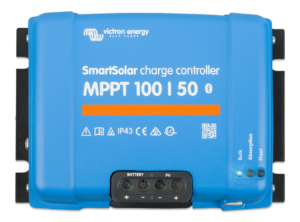 
Ask Me About This Install!

Ask Me About This Install!